“It was April 20, a day notable for only one reason: Shackleton finally made official what everyone had expected for a long time. He would take a small party of five men and set sail in the Caird for South Georgia to bring relief.” – (Endurance, Alfred Lansing)

The telling of Sir Ernest Shackleton and the Imperial Trans-Antarctic Expedition, at no point, lacks for adventure, bravery or heroism. The entire experience from the launch at South Georgia and the entrapment in the ice, to the evacuation to the pack and the sledge across to Elephant Island, to the final 800-mile sea voyage back to South Georgia, every bit an amazing feat of human endurance.

It was this last section of the story, the journey in the James Caird, that lead Rick and I in the fall of 2016 to Dulwich College on the south side of London.

To set the stage, it was after finally landing on Elephant Island that Shackleton realizes, there would be no chance of any rescue party finding the crew. On that April day, “The Boss” chose the only remaining option, to sail across 800 miles of open Arctic sea in one of the three remaining lifeboats from the Endurance. The James Caird would take a small crew in an attempt to reach their original starting point of the whaling station on South Georgia.

The Caird was a 23-foot-long, double ended whaler weighing in at approx. one ton. She was the largest and most sea worthy of the six lifeboats carried by the Endurance. Only three boats, the Caird, the Dudley Docker, and the Stancomb Wills, remained from when the Endurance was finally crushed and sunk beneath the ice. All three having been drug across the ice by the crew with all the gear they could salvage before the Endurance went down. It would take some exceptional refitting work by the ship’s carpenter “Chippy” McNish to raise the gunnels and enclose the top of the boat for the journey. He fabricated a makeshift caulk using a mixture of seal blood and flour and enclosed the top using wood and nails taken from packing cases and the runners of the sledges. As an additional step, Chippy would strengthen the keel in an attempt to make the craft withstand the seas during the 800-mile trip.

The journey for Rick and I started after countless books and stories of the Shackleton expedition. During one of those telling’s came the discovery that the Caird itself, remained intact today, a proud display of Dulwich College in London. So, after some time planning and clearing of schedules, we found ourselves on the mainline train from Victoria to West Dulwich, an overwhelming sense of excitement building as the train drew us closer.

We turned into the Dulwich campus and were met by a surprisingly bold iron gate emblazoned with the Dulwich coat of arms. There was mild internal panic as we both thought, “god what do we do now, jump the fence?” All of which was quickly answered as a friendly gentleman walked out asking if he could help us.

I was so excited, you would have thought I was there to see the queen. I stumbled over my words, for some reason thinking “this guy is going to think we’re nuts coming here to see a boat”. I stammer out “we’re….we’re here to see the….” And he finishes my sentence “Oh the Caird? Of course, through the gate, and to the building with the clock”. The gate easily swung open allowing us entry.

We enter through an atrium connecting two buildings, turning right and head into the reception area. Small and cramped with a little seating, but a friendly woman named Sanja greets us with a warm smile. We introduce ourselves and in short order there are forms signed and badges festooned around our neck. We’re informed our guide will be with us shortly, and soon an energetic and friendly older gentleman comes in carrying a stack of school papers. He rushes in, says hello but asks for a moment to discard his papers in his office.

John Bardell is a professor at Dulwich but more importantly an enthusiastic supporter and follower of the Caird story. At the time we were there, John was the only person who gave tours of the Caird.

Rick remembers: “There are introductions and handshakes and John is eager to get going. You never feel like this is a chore for him or that he doesn’t like doing it, but you certainly get the impression he’s a man on schedule”.

John smiles from under his glasses and we eagerly follow him in his light blue button up shirt and cross stripped tie. He is all manors, and even with his rapid pace you never feel rushed or that our presence in his day is an inconvenience.

As we walk from the main building John informs us he is one of the initial members of The James Caird Society, a group devoted to the preservation of the Caird and its story. We continue heading toward a large modern building with a glass enclosure prominently at its front. As we drawn near, we begin to see into the atrium through the glass and our pulse rushes as in an instant we recognize the Caird sitting proudly on display in the center.

We enter the building from the side and John explains the building, then just six months old, had been designed with “the little boat” as its center.  Through a few more doors and we enter the atrium and finally lay our eyes on the Caird.

The first shock is of course you assume the boat would be behind glass or well out of reach. But no, the Carid sits proudly in the center of the atrium, a metal guardrail encircling its base but not so far that you can’t reach right out and touch it, and we did just that.

John was a great sport, encouraging us to look at every angle of the boat, all the while elaborating on various facts and details about the Caird and the journey. In our excitement we’d finish his sentences or add details to John’s facts and he quickly realized we were truly interested and knowledgeable about the story. Rick commented that he saw a twinkle in John’s eye that said, “Oh these boys know their stuff”.

We discussed the hurricane force winds they sailed through, the constant bailing and being soaked by relentless spray. Their means of food being “Hoosh” heated in a primus stove wedged between two men’s feet. The more we knew, the deeper John would go with subtle details he wouldn’t have passed on to the average visitor. He glosses over some things saying, “of course you gentlemen know the story”, and precedes to give us a more interesting tidbit than perhaps what he was planning to give originally, always making us feel included in the discussion. With John this was a conversation not a lecture.

Rick commented, “there was a depth of detail as the tour continued. Details matter to John. When he gives us these little facts, it was like being given tiny secrets. This gave the visit an unexpected richness”.

It’s been said the Caird journey could be the greatest navigational achievement on the seas. Frank Worsley the Captain of the Endurance and chief navigator on the Caird, was unable to take more than a few sightings with his sextant during the voyage as the weather proved so overcast and stormy. He described one sighting as “…cuddling the mast with one arm and swinging fore and aft round the mast, sextant and all…” and he would “…catch the sun when the boat leaped her highest on the crest of a sea…”. How he was able to navigate to a small island in the middle of the arctic sea is astonishing.

In 1922 John Quiller Rowett, who had been financing Shackleton’s last voyage aboard the Quest (Shackleton–Rowett Expedition) donated the Caird to Dulwich College after Shackleton’s death. Rowett and Shackleton had been friends during their school days at Dulwich many years prior.

In 1944 the Caird was damaged by German bombs during WWII but in 1967 the little boat was taken to the Nation Maritime Museum for restoration. She returned to the college in 1985 and has been on display there ever since.

For us it’s amazing the Caird still exists at all. John explains, the boat is of course all original and intact. However, when the boat was recovered, and during the various years it spent bouncing from one owner to another, the sails, and the top decking had disappeared. During the full restoration, the team took great pains to try and blend the reconstructed pieces to match the original workmanship from “Chippy” McNish.

John takes us to the second floor, so we can peer down into the hatch. He specifically wants to point out the round pole nailed to the keel, letting us know that it is in fact the original mast from the Dudley Docker which Chippy put in place to strengthen the keel on the Caird.

While we stood looking down into the keel, John hit us with another funny detail about how Chippy’s granddaughter had recently come to see the Caird. In repeating what she had told him, John leaned in discreetly saying “she said to me, ‘He was not a nice man”. Perhaps some of the stories of McNish’s rough personality were true.

We assumed having seen the Little Boat our time here was done. But John had a number of other things to show us before we left.

John walked us back into one of the older buildings called Lowee Hall. Lowee Hall was, as John explained the original location the Caird had been displayed.

Still on display here were other arctic relics from the Endurance voyage and others. The Caird’s original main sail was displayed on the wall, tattered and worn as you would have expected. 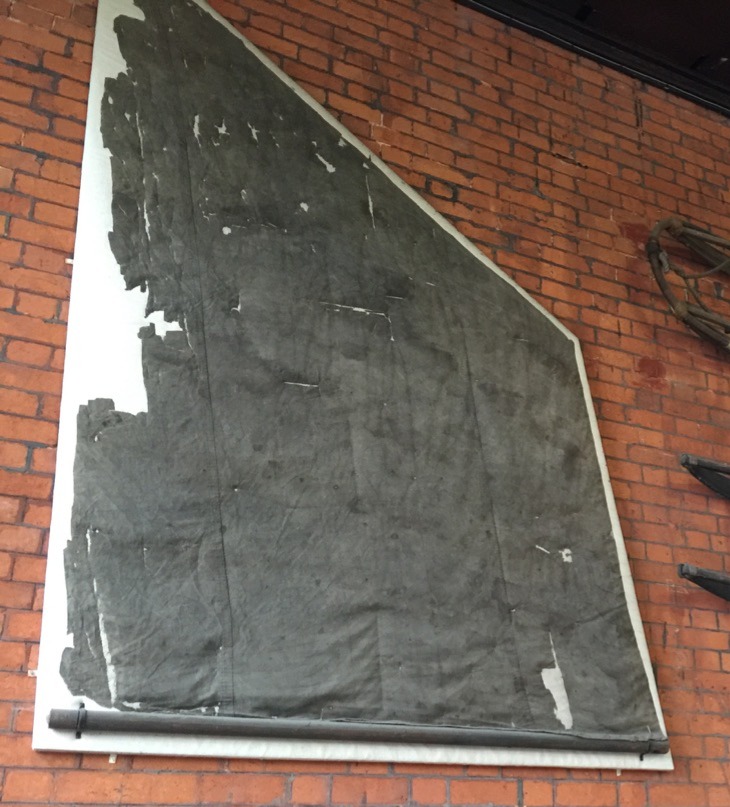 In addition, two sledges from the 1907 Nimrod expedition hung beside it.

And in a case just below, a recreation polar suit like the kind Burberry’s had made in the day. This one having been used for the Kenneth Branagh film “Shackleton”.

Rick was in his element as he and John explore the polar maps on the wall, and diving deep into the subtilties of the route and distances crossed during all these expeditions. John is a willing instructor in these conversations.

The final stop along the tour was a more profound and subdued relic. Displaying proudly above the library door was the flag that had been draped over Sir Ernest’s coffin during his funeral on South Georgia.

Adding a final historical note from John, he told us Frank Wild, having been part of a number of arctic explorations and Shackleton’s second in command during the Endurance expedition, his final resting place had been located in a pauper’s grave in South Africa. When discovered, it was moved to South Georgia and placed to Shackleton’s right side, buried next to “The Boss”.

Overall visiting the Caird was an amazing experience and a must-see for anyone who is passionate about the age of arctic exploration.  And it was wonderful to see the care and effort Dulwich has put into making sure this piece of history is available to the public.

To arrange a visit to see the James Caird contact:

The James Caird Society, a registered charity, was established in 1994 to preserve the memory and honor the remarkable feats and leadership of Shackleton.

Lord Shackleton, son of the explorer, was the Society’s Life President until his death in 1994. His daughter, the Hon. Alexandra Shackleton, has been President since l995. It was founded by Harding Dunnett and the current Chairman is Admiral Sir James Perowne KBE.